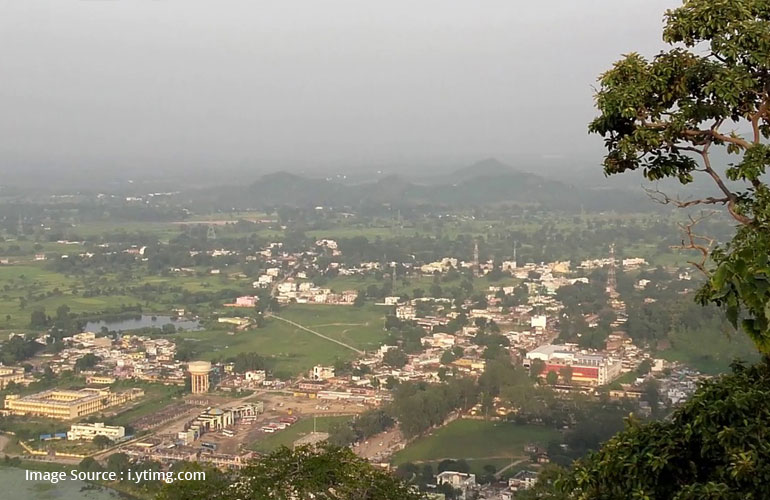 A climb to Gadiya Mountain in Kanker is an experience that combines history, physical fortitude and mesmerising views of the town below. Transport yourself to hundreds of years ago when Maharaja Dharma Dev of the Kandra dynasty constructed a small fort which towered over Kanker and its surrounding villages.

Wind your way up the 700 odd steps for an excellent view of the glistening Dudh River winding through Kanker. You will also sight plenty of natural ponds amidst lush paddy fields and a hive of local homes, temples and the palace properties.
The hill plateaus on top to accommodate remnants of Maharaja Dharma Dev’s rule. The mountain was the erstwhile natural fort of the 14th-century ruler and an old brick gate still stands here. There is also a large pond named Sonai Rupai after the king’s daughters, who drowned here. The pond, according to lore, has never dried out. If you walk right of the green-tinged pond, a narrow split in two large rocks makes way for the Chhuri Pagar Gufa. This cave apparently tunnels far out to villages around Kanker and possibly served as an escape route. Many have tried traversing the dark halls, but bats and snakes have thwarted their attempts. Another historic spot is the Jhanda Shikhar, which lies at the back of the mountain and can be reached by a trail that goes from the left of the pond. It is here that Holi was celebrated at the time of Dharma Dev. Close by is the former edge-of-the-valley gallows known as Phansi Matha.

Kanker lies in the dip of Chhattisgarh plains, which are sandwiched between the plateaus in the north and south. The lush Keshkal Valley is the starting point of your ascent onto the plateau when heading southwards into the Bastar region. The highest part of the hairpin bends lies at 651m, giving a bird’s-eye-view of the region below. On top of the plateau is a scenic stretch of a smooth sal tree-flanked road.