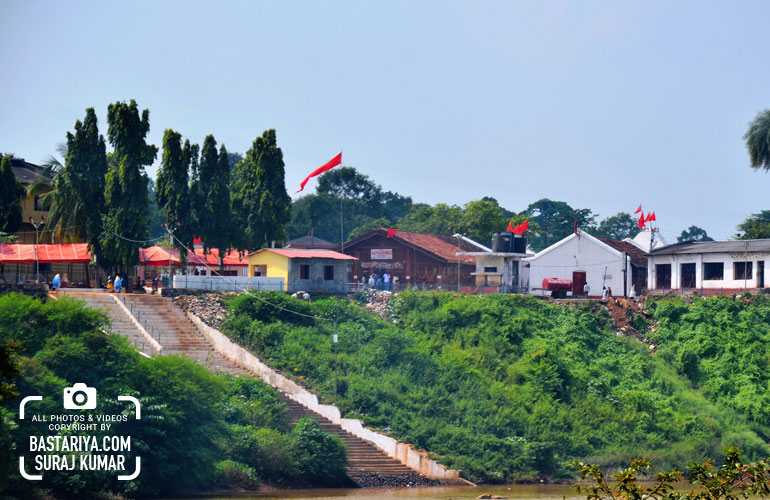 When in the district of Bastar, one must visit the southern part of Bastar, the Dantewada. Dantewada is 82kms from Jagdalpur and is well connected with Raipur and many places of Chhattisgarh, Odisha, Andhra Pradesh and Telangana, including Hyderabad. The famous South Eastern Railway runs trains successfully between Visakhapatnam to Bailadila passing through Dantewada.

The Dantewada is a beautiful place of visit and was also the capital city of many kingdoms in the past. The whole district of Bastar believes and trusts in the holy pilgrimage to Maa Danteswari which is situated at Dantewada. The astonishing fact is that the Dantewada area was earlier known as Taralpal and Dantawali as depicted in the stone carvings found in the district. The entire district is filled with small hills, thick green Sal and Teal forests, rivers, waterfalls and many historical places.

The major tribes found in the area are Gond, Maria and Dolra. The visit to the Nangur tribal market of Dantewada, will bring in lot many local drinks and delicacies to the tourists giving a life time experience.

Below are some of the famous tourist destinations in Dantewada,

When Goddess Sati committed self immolation on the Yajna fire after she was insulted by her father Prajapati Dasha, Lord Shiva destroyed the Yajna and started the Tandav. He took over Goddess Sati’s body and started roaming around endlessly. In order to silent Lord Shiva, Lord Vishnu slowly cut down the dead body of Goddess Sati with Sudarshan to free Lord Shiva from the grief.

Parts of the body were scattered in 52 different places known as Shaktipithas. The teeth of Sati fell in this place hence Danteswari in Dantewada. The incident of tooth falling in southern parts of India is described in the Puranas.

In the 11th century, the Nag dynasty gained victory over Gang Dynasty. Maa Manikeswari was the kuldevi or presiding deity of Nagvanshi kings. At that time, the Devi from the Devgudi of the nearest village Taralpal was well known. The Nag king Jagdesh Bhusan knowing the importance of Taralpal had shifted his capital from Barasoor to Taralpal along with Maa Manikeswari. He renovated the Matagudi and constructed a new temple for his Kuldevi and established the Goddess Manikeswari.

Due to the Matagudi and temple construction, the glory of Taralpal increased. People and villagers from far off places come to Taralpal as it is the centre of spirituality. In the 14th century, King Annamdev of Kakatiya dynasty entered Chakralot. After gaining victory over Bijapur, he conquered Barasur from Nagvanshi Kings. When the king visited Manakeswari temple in Taralpal, he was impressed and thus made Taralpal his capital.

From that time the temple is known as Danteswari temple and the village of Taralpal was converted to Dantewada.

In the earlier days, due to the lack of transportation, the local villagers created their own Matagudi and worshipped Maa Danteswari in different forms. They consider them as sisters of Maa Danteswari. There are 32 sisters known as thirty-two sisters. Each Devi Maa has her own importance, place and style of paying homage.

The Kakatiya Kings constructed the temple during the 14th century and a lot many statues were kept here from Barasur. Earlier the temple was at Gudi ie., the place where the prayer and the puja of Goddess was done. Kakatiya rulers were great devotees of Maa Danteswari and after shifting the capital from Dantewada, whenever kings visited the temple, a gift of land was offered. In total 144 lands were offered till 1909. The temple management was done by the Zia family and hereditarily is done till date.

The beautiful garden is situated at the back of the temple. It is known as the Mataji I Bagiya. Visit to the temple would give a satisfying peace and grace in the minds during festivals.

The temple is located in the second chamber behind Danteswari temple premises. It is a small temple filled with other God statues. The chamber is meant for offering prayers and pujas. This is an ancient temple dedicated to the Lord Shiva.

The temple is 2kms behind the Goddess Danteswari temple. The scenic beauty of the road is spectacular with ancient idols and statues from the 14th century. Near to the temple exists a mountain known as Chudi Dongri.

Maa Danteswari temple is situated at the intersection of two rivers. The colors of both the rivers are different and visible. Dankini and Shankini belong to Lord Shiva’s group. The devotees who visit Dantewada, take a holy dip and collect water to eliminate possession of ghosts.

This is an old and historic temple in the Samlur village near Dantewada. It is built by the Nagvanshi King around 900 years ago. The temple has a pond located nearby.

As per the ancient beliefs, the ponds constructed around the temples are used for salvation. Thus many water bodies were dug and found in most of the archaeological sites. The temples requires conservation.