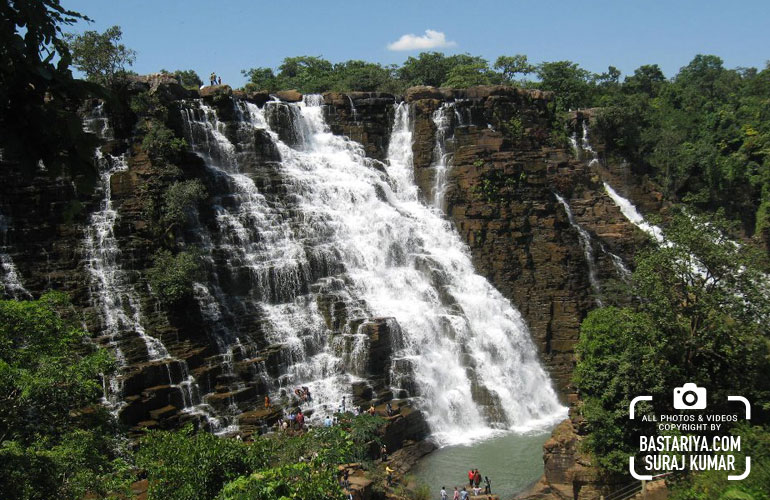 Surrounded by greenery, the Tirathgarh waterfall is located inside the Kanger Valley National Park. Visiting this place has its own benefit, one you visit the national parks in India and second, you get to see the beauty of the nature and the awesomeness of the waterfall. As you enter the park, the silent atmosphere and the roaring sound of the waterfall gives you an immense satisfaction of the nature.

The waterfall has its originator at a very less distance from the fall. A lake is considered to be the origin. The water flows down the lake in a traversed way passing through many streams. At last, the huge water formation comes down in the form of a white milky liquid storm, falling on the river Mugabahar. The waterfall is believed to have a height of 100 feet, which is a whopping height for a spectacular view of the speed and formation of the fall.

The Tirathgarh waterfall has its own versions, during summer and monsoons. As we all know, the waterfalls are amazing during monsoons, similar is the case with Tirathgarh. The waterfall looks like a single stream of water coming down a height of 100 feet. Nothing else can be seen during the monsoon season except the heavy fall of the water.  During the summers, the rocky cliffs and the steps can be seen; the water gushing through these rocks, forming a milky fall on the rocks can be viewed.

The rocky steps and the water formation over them, is a mind blowing view of the fall. It is an imaginary procedure of the water to flow through a lake in a zig-zag manner crossing through streams and then flowing down a hill where its gushing force looks like a milky fall. The falls are so powerful that its continuous pressure on the rocks, leads to change the shape of the rocks every now and then. That is the superlative power of the nature, we human stand nowhere!

The Maria tribes and their flea market are present in almost every city in Bastar. The Maria tribes would set up their flea market near the falls on every Monday. Visitors visiting the falls during a Monday can also enjoy the weekly market nearby. The Tirathgarh waterfall is considered to be a religious place with temples constructed of Shiv and Parvati, which are visited by the pilgrims in and out of the state. Huge numbers of people gather here on the day of Mahashivratri to seek blessing and to have a spectacular view of the fall. The festival season continues for almost 3 days.

A small village known as Tirathgarh is situated towards the west of the fall, thus the fall deriving its name. Every place or city constructed has its own history. The name of the Tirathgarh fall has its own suspense attached. There were two brothers known as Tirathraj and Chinraj back in the olden days. They were attracted by the beauty of the place and hence decided to spend their lives here making it the capital. Tirathraj made a fort on the lower region of the fall and a village on the upper region. Perhaps, the fort is now completely destroyed but the village still exists.

Chinraj constructed a fort and a village nearby the fall but is 5-7kms away. There are certain monasteries constructed near the fall, built in remembrance of a family member, as per their habits and the God worshipped. These monasteries are generally found in places like Bhoramgad, Bijapur, Charama, Darela, Moria, Madia, etc.

The waterfall is a breathtaking view in every season but to have a complete view o f the fall, monsoons are the best, hence making October to February the best time to witness the gush of the water. The fall is located 40kms from Jagdalpur on NH 221 making it a must stop for sightseeing when in Chhattisgarh.