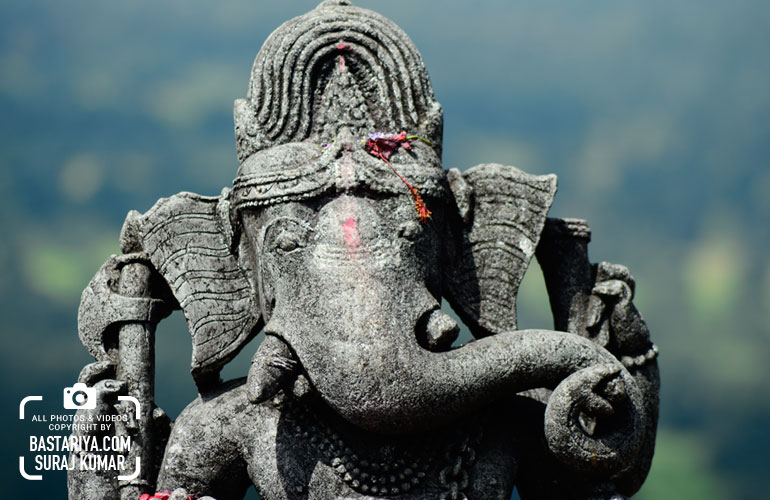 There are certain popular places to be visited when in Dholkal.

The idol of the Lord Ganesha is 3000 feet above sea level and the Archaeological survey of India has found the idol at Dholkal which is 25kms from Dantewada. The idol is located at Phoolgatta forest range in Bacheli division.

From the top, the entire valley with deep forests is a breathtaking scene to watch and is difficult to reach easily. The artistic idol is nearly 6 feet height and is on a 21 feet granite floor. The idol is having Pharsa in upper right hand, a broken tooth in the upper left hand, Akshya Mala with Abhaya Mudra posture in lower right arm and Modak in the lower left arm.

As this is considered to be the place of Lord Ganesha, hence the area is known as Dantewada. A cave known as Kailash cave is also in Bastar, not far away from the area.

The area is known as Kailash Khetra. There was a war between Lord Ganesh and Parshuram in this place. A village known as Parashpal related to Parshuram and another village Kotwal is located here. Both villages are nearby and between Datewada and Dholkal.

Lord Ganesh lost his tusk in this place with his fight with Parshuram. It is said that Lord Parshuram went to Lord Shiva but he was blocked by Lord Ganesh. Parshuram with anger hurled an axe at Lord Ganesh.

Lord Ganesh knew that the axe was given by Lord Shiva out of respect, he allowed the axe to strike him and as a result he lost his tusk. The protector of Dantewada area is Lord Ganesh.

One of the best places in Chhattisgarh for trekking and the distance is 7kms. The scenic beauty of the place, at the top of the hill, with a setting sun in the background of dense forest and Lord Ganesh at the side, is a memorable experience and is awesome.

The Goddess is also known as the Goddess to get a life partner. The temple is located in the Chidnar village of Dantewada. In this temple, people worship to get their desired love and partner. Every year large number of visitors comes to the temple to pray before the Goddess to fulfill their desires.

Chidnar is 29kms on the left side of Hiranar on Geedam Barasur road. The temple is 4kms from Chindnar. A very old temple, small one in a dense forest where statue of Maa Mukudi Mawali is worshipped.

The World Bank aided proposed Bodhghat Hydropower Project could not start due to environmental issues like submersion of villages, dense forest and rehabilitation issues. The scenic beauty of the place is very charming and great.

An exotic destination near Barasur for nature lovers. The lush green forest area, coconut plantation, large sand bank of Indravati River, makes the place a perfect destination for visit. Besides the temple, a vast pond in the Barasur town can be found with image of Lord Vishnu and Vasuki snake.